Dhulikhel is a typical Newari town with nearby Tamang villages. It is situated 30 km. east of Kathmandu on the side of Arniko Highway on the way towards Tibet. Dhulikhel is popular for its natural beauty and ancient traditions. The Himalayan ranges from the twin crest of Mt. Langtang in the west to the Mt. Everest in the east can be clearly viewed in a clear day. Dhulikhel is ideal for snow-capped peaks, sunrise, sunset and it is different from any other place. One can say Dhulikhel is where the peaks speak. KNOW MORE ABOUT DHULIKHEL »

Things to see
Whether it’s a mountain sunrise you’re after, or 400 km of horizon from the Annapurnas in the west to Numbur in the east, the Himalayan skyline dominates Dhulikhel. And unlike that Thamel-on-the-Hill, Nagarkot, Dhulikhel has culture with its old Newari heritage. At 1,500 m it is also milder in winter than Nagarkot.

Dhulikhel was once known by the Buddhist name of Shrikhandapur and still has a few Buddhist stupas in memory of the old days. Namo Buddha is an interesting and pleasant three-hour hike from the town, and has a nice mix of Buddhist flavour and old Hindu temples. Dhulikhel also has several ancient temples dedicated to Sweta Bhairava, Hari Siddhi, Shiva, and Narayana, each with an interesting story related to how they came into being. 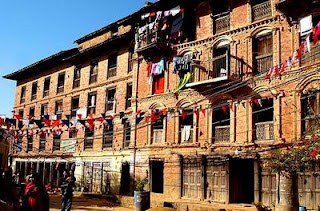 There are plenty of other short hikes to undertake from Dhulikhel, but one of the best is the pleasant half-hour uphill from Dhulikhel to the telecommunication tower. Walk through a lush forest echoing with the chattering of racquet tailed drongos and turtle doves to come to a temple dedicated to Kali. If you can manage to wake up early and get up there, it is a sunrise you will remember for years. And there are more than a dozen hotels to stay for the night if you want to do this, from the upmarket Himalayan Shangrila, which stands at the highest point here and offers the best views to the 28-year-old Nawaranga Restaurant and Guest House, which with its gallery of local art is a backpacker’s dream come true.Dhulikhel, Namobuddha & Panauti
The ancient Newari town of Dhulikhel is situated 30 km east of Kathmandu and has spectacular views of the Himalayas. Once an important link in the ancient trade route to Tibet, Dhulikhel has a glorious past which can be seen in many beautiful buildings and in intricate wood carvings in the shop-lined streets and temples
Namobuddha

The hike from Dhulikhel to Namobuddha takes about two hours. It is relatively easy and passes through some typical villages such as Kawe (Kavre) and Phulbari before reaching the Buddhist monastery and stupa at Namobuddha, an important destination for Buddhist pilgrims.

On the hill above Namobuddha is a famous stone tablet (left) depicting a Buddha (there have been many before the historical Buddha) feeding himself to a starving tigress and her cubs. This is from a famous Buddhist tale expressing the great compassion of the Buddha. 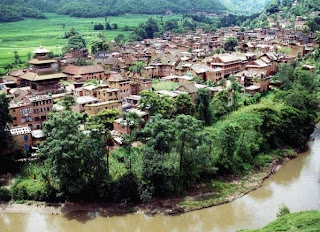 Panauti is a quaint and interesting destination in Nepal. It feels as if it has been left exactly the way the founders had built the town. A nostalgic atmosphere covers the narrow town streets and ancient structures. It is known as a Newari town that is located near the Roshi Khola and Pungamati rivers. Panauti can easily be reached from Kathmandu, which is 32 kilometers from Panauti, Dhulikhel and Banepa. This fascinating destination in Nepal was also a dowry. King Bhupitendra Malla gave his sister the town of Panauti as a dowry.
As with many villages and towns of Newari, Panauti is also steeped in culture and tradition. Visitors will often find colorful stones, petals and other items that are laid out on the pavement. They are representations of Lakshmi’s footprint, known as the Goddess of Wealth and Prosperity. Locals leave these offerings in the mornings to invite and bring Lakshmi into their homes and lives.The most noteworthy attraction in Panauti, is the Indreshwar Mahadev Temple complex, which dates back to the 15th century. The Mahadev temple is surrounded by smaller temples and a number of shrines, but the Indreshwar Mahadev Temple steals the show. It is an impressive three-storey structure, which is constructed as a pagoda. The struts that are located on the inside of the temple date back to the 14th century and the carvings in the struts are breathtaking. The intricate and detailed carvings of warriors and other figures are almost life-like. The doors are just as spectacular as the struts, unmatched in craftsmanship and beauty.The temple that is located opposite to the Indreshwar Mahadev Temple also has spectacular woodcarvings to be viewed, with many of the other temples exhibiting historical relics, murals and stone reliefs. At the Brahmayani Temple visitors will find the well-preserved and greatest collection of religious art masterpieces, painted in the traditional Newari style.
Outdoor enthusiasts that enjoy mountain biking or hiking should enjoy the routes between Namo Budda, Lubhu, Dhulikhel, Banepa and Panauti. The surrounding area is breathtaking and peaceful. Visitors to this destination in Nepal will be surprised at the great amount of attractions and the beautiful landscapes that can be seen all around the town.
From Namobuddha you can head down the mountain the same day to the town of Panauti, on the valley floor. (There is also a bus connection to Panauti).
Brahmayani Mandir 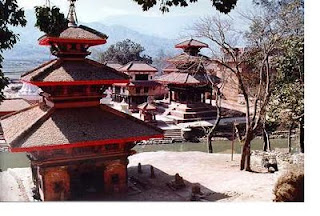 The temple complex is centered around the 15th-century Indreshwar Mahadev Temple, a three-story pagoda within a walled compound. The temple has beautifully carved roof struts.In the morning in Newari towns and villages you find stones in the pavement decorated with paint, offerings and marigold petals. The stones represent Lakshmi’s footprint, the Goddess of wealth and prosperity, and they welcome her into the house.Panauti locals pay their visits to the different temples in the morning.
———————————–
HOTELS IN DHULIKHEL
———————————–
Dhulikhel Mountain Resort – Dhulikhel 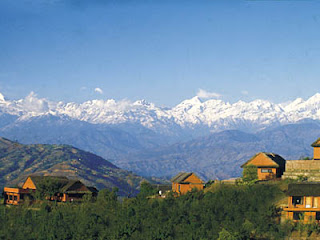 The Dhulikhel Mountain Resort is nestled in the Himalayan mountains, conveniently located on the Arniko Highway, giving easy access to Kathmandu and Tibet. The bungalows are cozy, equipped with modern amenities offering stunning views of the snow peaked mountains and countryside. Enjoy a variety of activities such as country walks, river rafting and other excursions in this peaceful setting. 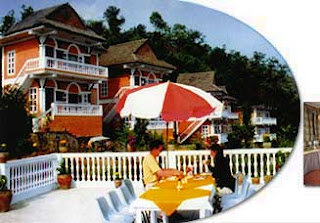 star rating : 2 star
rooms : 17
address : Dhulikhel, Kathmandu, Nepal
telephone : +977 11 490048, 490966
facsimile : +977-1-4250364
Website : http://www.highviewresort.com/
The High View Resort, Dhulikhel is located on the rolling hills above the old historic town of Dhulikhel. It overlooks the impressive Himalayas and the plains of Paanchhkal and Dhulikhel Valley. The traditional Nepali style bungalows are unpretentious with balconies, with some including a fireplace. 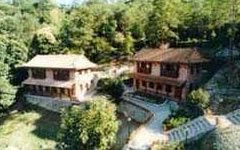 Situated among pristine forests of pine, rhododendron and apple trees, The Dwarika’s Himalayan Shangri-La Village Resort is a scenic journey of 45 minutes from Kathmandu and half hour from Dhulikhel city. Naturally confined at an altitude of 1700 meters, the resort endows you with the freedom of a 180-degree view of the mighty Himalayas, the Kavrepalanchok valley below and the most amazing sunrises and sunsets. The resort spread over 20 acres of gentle slopes has its own forest, cascade pools and a host of species of birds, butterflies and even deer.
Designed and built to depict ethnic “Newari” and “Gurung” building styles of Nepal, the rooms do not come with a television, but who would really need one when rooms with the best views display huge panaromic glass windows in front of your king sized beds? It is like having your own 150 inch plasma television, and it’s constantly playing the nature show, live, right in your room.Standard facilities: Telephone, Minibar, Room Service, Televisionhotel facilities : ActivitiesA host of activities is on offer like Hiking, Mountain biking, white water rafting and kayaking in the Bhote Koshi, bungy jumps, bird watching trips and visits to the old Newari town of Dhulikhel and religious centers in and around. The sunrise and sunset view point is located within the Village Resort and is just a short walk from the guest accommodations. Mountain Bikes and Guides are available for hire.