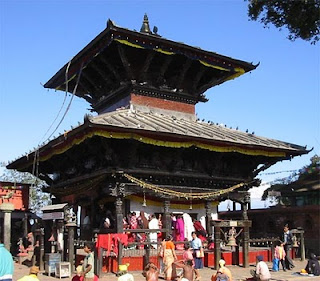 The Legend behind Manakamana has it that Gorkha King Ram Shah’s (1614-1636 A.D) Queen possessed divine powers- a fact known only to Lakhan Thapa, her devotee. One day, when the King discovered that his Queen was a Goddess, he suddenly died. As per the custom, the Queen had to commit sati on his cremation pyre. Consoling the lamenting Lakhan, she promised to reappear near his home Manakamana temple
Six months later, a farmer hit a stone while ploughing his field and noticed blood and milk flowing from it.The flow ceased when Lakhan worshipped the stone with tantric rituals. The site became the foundation of the present-day shrine-the current pujari Priest being the 17th generation descendant of Lakhan Thapa.
Renovated many times over the centuries, the Manakamana Temple has a four-tiered pagoda style roof with the entrance facing southwest. The priest performs daily prayers and rituals behind closed doors before allowing the public to enter. Manakamana Devi is widely believed bless her devotees by fulfilling their wishes.

Wish Fulfilling Goddess
Since the 17th century Manakamana Devi has been widely venerated all over the Nepal because of the belief that she fulfills all wishes. The Shrine is accessible in about 10 minutes with cable car.

Safety
Imported and installed by the world renowned Dopplemayr of Austria, the Manakamana Cable Car system is 100% safe with supporting feature like automatic backup generator, hydraulic emergency drive and a team of qualified and well-trained staff and technicians.

Ever since its inauguration by His Royal Highness Crown Prince Dipendra Bir Bikram Shah Dev on November 24 1998, Manakamana Cable Car has immensely contributed to the religious and touristy significance of the area. Besides drastically reduced the previously arduous five-hour climb to a mere 10 minute comfort trip, it has revolutionized the tourism of international standards.

Manakamana Cable Car has been able to garner overwhelming support from its customer within a short period of operation. This is attributable to proven records of safety, comfort, cleanliness and customer service, combined with the cultural importance of the Manakamana region and superb natural surroundings.

Location:
The grand main gate welcomes all to the Bottom Station (258M) which is located on the bank of the Trisuli river and is 2.5 hour drive away from Kathmandu (2 hours from Pokhara and 1 hour from Narayanghat).
The Top Station (1302m) is at close by the Manakamana Temple, which lies south of the historic town of Gorkha and is located on the top of a ridge overlooking the spectacular river valleys of Trishuli and Marshyangdi.Other Facilities:

Nature’s Prize:
Journey to Manakamana can be exhilarating both spiritually and visually. Spectacular views from the temple area include deep valleys, terraced fields as well as the Mt. Manaslu-Himlchuli and the Annapurna ranges.