Pokhara valley, the ‘Jewel of the mid-west’ is a favorite of tourists from around the globe. With the magnificent Annapurna range of mountains as a backdrop and the serenity of the three lakes of Phewa, Rupa and Begnas, Pokhara is the ultimate destination for relaxation. Yet the valley has grown in recent years as the destination for adventures sports such as paragliding and ultra-light flights. With boating, bird watching, trekking and mountain biking as the other attractions, Pokhara has it all.

Pokhara sits high on the list of ‘must visit’ places in Nepal. Tourists on extended holidays in Nepal make multiple visits to this famous valley of the three lakes. The tourist district of Pokhara better known as ‘Lakeside Pokhara’ is quite distinctly separate from Pokhara city. Lakeside sprawls beside Phewa Lake and is reminiscent of Thamel except for the ample space and miniscule traffic which makes Pokhara so much more enjoyable and relaxed than its counterpart in Kathmandu. The enchanting Pokhara valley with the dominating presence of Mt. Machhapuchhare (Fishtail Mountain) in the background is the gateway to the Annapurna region where many a trekker finds his Shangri-la. Pokhara is also ideally placed for adventure sports such as: rafting, paragliding and ultra-light flights.

The relaxed atmosphere on the shores of Phewa Lake gives a trekker a much needed respite from days of hiking up and down the hills and mountains on one of the popular Annapurna treks. The crowded bars and restaurants are the places to seek companionship, where tall stories and real life experiences are shared with perfect strangers. The friendly Nepalese make a tourist feel at home to the point where many stay on for extended periods and come each year to seek those 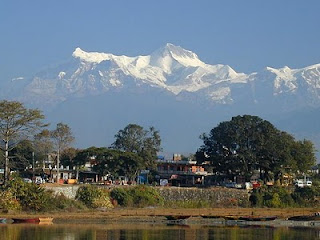 friends he’s made and find peace of mind. Pokhara’s bewitching beauty has been the subject of many travel writers. Its pristine air, the spectacular backdrop of the snowy peaks, the serene lakes and the surrounding greenery make it ‘the jewel in the Himalaya’, a place of remarkable natural beauty. Mt. Machhapuchhare (6,977 m) has a mesmerizing effect on any nature lover and the Phewa Lake creates an ambience of peace that is magical. Warmer than Kathmandu because of it lower altitude, Pokhara is pleasant in the winter and has a rich flora and fauna making it ideal for bird watching. Pokhara once lay on the important trade route between India and Tibet. To this day, mule trains arrive and set up camp on the outskirts of the town, bringing goods from remote regions of the Himalaya including Mustang. The people of this region are predominantly Magars and Gurungs, hardworking farmers who are known for their valor and have earned world-wide fame as fierce Gurkha warrior soldiers. The other well-known ethnic group found here are the Thakalis. Known for their entrepreneurship, they run many tea houses along the trek routes in the Annapurna region.

Places to see
Mountain Views Pokhara is blessed with stunning panoramic views of the Annapurna range which forms its backdrop. Although not the highest in the range, Machhapuchhare dominates because of its proximity to the valley and can be seen from anywhere in Pokhara. Stretching from east to west, the Annapurna massif includes Annapurna 1 to IV and Annapurna South. Further away are seen the giants, Dhaulagiri (8,167m) and Manaslu (8,163m). Phewa Lake Pokhara owes its popularity to enchanting Phewa Lake and along its eastern shore has grown the Lakeside town where tourists gather. It is the largest and most beautiful of the three lakes attracting a large number of visitors who enjoy boating on its placid waters. Boat can be hired and many visit the island temple that lies out in the middle of the lake. The other past time is sailing. Lakeside or Baidam, is a thriving resort town of hotels, restaurants, bars and souvenir shops that allows travelers to relax and yet have all they need.
Barahi Temple 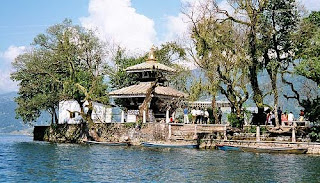 (Shown in Map) Located in the middle of Phewa Lake, the Barahi temple is the most important monument in Pokhara. The two storied pagoda is dedicated to the boar manifestation of’ Ajima who represents the female force Shakti. Sacrifices take place here and the largest crowds of devotees are seen on Saturdays, the official holiday in Nepal.
Seti Gandaki (Shown in Map) An amazing aspect of Pokhara is the vanishing river. A natural wonder, the Seti Gandaki goes underground, vanishing from sight in many places along its route through the city. At various points the river is barely two meters wide where its depth reaches an astonishing 20 meters! A good spot for watching the river below is Mahendra Pul, a small bridge near the old Mission Hospital. Here the river can be seen in all its ferocity gushing down the deep gorge that it has carved over millennia.
David’s Fall : Locally known as the Patale Chhango (Nether Fall), David’s Fall (known variously as Devin’s and Devi’’s Fall) is a charming little waterfall located about 2 km south-west of the Pokhara airport on the Siddhartha Highway. Many years ago a trekker named David or Devin is said to have been washed away by the river Pardi Khola and disappeared in an underground passage beneath the fall.
Mahendra Cave : A major attraction of Pokhara is the Mahendra Gupha, a limestone cave reached after a two-hour walk north of Pokhara. Known as the ‘House of Bats’ owing to a number of bats living within its walls, the cave is an interesting labyrinth of stalactites and stalagmites. Visitors will be well-advised to bring their own torches to closely inspect the formations. There is another deep cave called Bat’s Cave known as the ‘House of Bats’ owing to a number of bats living within its walls.
World Peace Pagoda
It can be seen on the top of 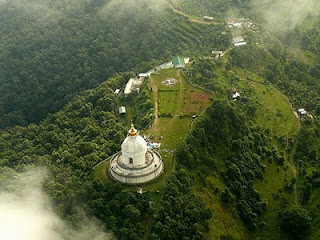 a hill on the southern shore of Phewa Lake. It has four images of Buddha facing in four directions. The dome shaped pagoda is an impressive sight and its hilltop location commands a great view. It is a great vantage point which offers spectacular views of the Annapurna.

The Old Bazaar A stark contrast to Lakeside Pokhara, the old Pokhara Bazaar is 4 km away from Phewa Lake. It is a traditional bazaar and a colorful gathering place for an ethnically diverse group of traders. The temples and monuments bear a close resemblance to the Newari architecture of Kathmandu Valley. Except for the large concrete buildings that have cropped up, the market place retains much of its original charm. It makes for a pleasant walk; there are shops selling anything from edibles and clothing to cosmetics and gold.

The old bazaar is also home to one of Pokhara’s most important shrines’, the Brindhyabasini Mandir. Perched on a shady hillock, this white dome-like structure dominates a spacious stone-paved courtyard.
Museums :The Pokhara Museum is worth a visit. Located between the bus stop and Mahendra Pul, it showcases the ethnic mosaic of the diverse cultures that thrive in western Nepal. The lifestyles and history of the Gurungs, Thakalis and Tharus are attractively represented by models, photographs and artifacts. Of much interest and also a major attraction is the recently discovered remains of an 8000-year-old settlement in Mustang. Open daily from 10 am to 5 pm, except on Tuesdays and public holidays.
Another interesting museum in Pokhara is the Annapurna Regional Museum which is also known as the Natural History Museum. Run by the Annapurna Conservation Area Project (ACAP), the museum has an exceptional collection of butterflies, insects, birds and models of wildlife found in the area. Located at Prithvi Narayan Campus, east of the old bazaar, it is open daily from 9 am to 5 pm except on Saturdays and public holidays. 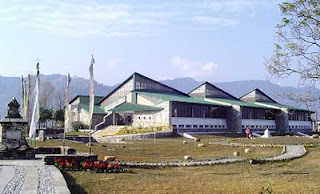 International Mountain Museum : The International Mountain Museum (IMM) has an impressive façade. It was built with the objective of recording, documenting, exhibiting and chronicling the entire past up to the present day, the development of mountain and mountaineering activities in the world. It has received much support from the many mountaineering clubs and associations as well as individual donors from around the world. The museum was established by Nepal Mountaineering Association (NMA) with the theme ‘Man, Mountain and Mountain activities around the world’. Accordingly, the entire display area of the museum has been divided along the theme. The exhibition Halls are:Hall of Mountain People: This hall exhibits the customs, traditions, heritage, culture and way of life of the mountain people.
Hall of World Mountains: This hall is showcases of all fourteen peaks over 8000 m. and displays geological facts related to the origin of world mountain systems. The hall also exhibits and explains the flora and fauna of the Himalaya. Another aspect of the museum is the focus on great personalities like Kumar Khadga Bikrum Shah (founder president of NMA), Dr. Toni Hagen (Renowned geologist and lover of Nepal, who published the first pictorial “Nepal”), Reverend Ekai Kawaguchi (The first Japanese to visit Nepal in 1899), and Dr. Harka Gurung (Renowned scholar, geographer, development planner and first Tourism Minister of Nepal). Hall of Mountain Activities: Highlighting historical ascents and explorations in and around the mountainous regions, this hall is dedicated to mountain activities such as mountaineering and trekking. Interestingly, it also showcases the development of climbing gears and other essential mountaineering equipment.
Surrounding Areas; Pokhara is where some of the most popular treks in the Annapurna region begin and end. Among them, the highly recommended treks are the intensive Annapurna Circuit and Jomsom Treks. For those with limited time on their hands, there are a number of short treks that are equally fascinating like the Sarankot, Naudanda, Ghandruk or Ghorepani treks.

Sarangkot : The Sarankot (1,592m) trek is popular for its bird’s eye view of Pokhara and the spectacular panoramic view of mountains. It lies west of Pokhara and the hilltop was once the location of a Kaski Fort. Just a short 2 hour scenic walk through small villages and jungle from the main tourist area of Pokhara, or a 45 minute drive. Sarangkot is a beautiful village best known for its sunrise, where on a clear day you can see an unobstructed view of the Himalayan mountains of Annapurna range, Dhauligiri, and Fishtail.

Another main attraction to Sarangkot is to spend an hour in the sky paragliding with fantastic views of the mountains and the city below. To experience true Nepali culture take a 3-hour tour around Sarangkot and meet the locals and see how they live. Sarangkot has many hotels and local shops to supply you for all your needs.

Begnas Lake : Located in a quiet corner some 12 km east of bustling Pokhara town, lies this wondrous paradise – the Begnas lake, known for its clear spring-fed water and lushly vegetated surroundings just the setting for your ESCAPE TO ANOTHER WORLD …
Apart from its colorful ethnic villages, the Begnas lake area is recognized for its abundance of fresh water fish and the surrounding forestland for its variety of flora and fauna. The subtropical climate is ideal for fruit plantations as also for growing cash-crops such as mushroom and coffee. It is not uncommon to see migratory birds from as far away as Siberia en route to the Gangetic plains of India. This is also the hunting ground for the Himalayan Leopards and other smaller animals and exotic birds. 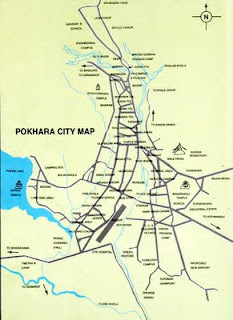